Resistance ranges are 19.999 K ohms (minimum digit represents single ohms), 199.99 K ohms, 1999.9 K, 19.999 M, 199.99 M, 1999.9 M, 19.999 G, 199.99 G, and 1999.9 G ohms. The single conductance range is 199.99 pS. There are two offset controls; one control sets the “zero” for resistance, which is determined while the terminals are shorted together. When set correctly, all nine ranges will read zero, and this control will generally never need to be altered. (It is set correctly as shipped.) The other offset control is a knob on the right side for offset current. It should be set for zero while on the conductance range with nothing connected to the terminals. The correct setting of this control is slightly temperature-sensitive, and should be re-zeroed if the temperature changes by more than 5ºC. With each of the nine resistance ranges, there is a constant current that flows through the unknown resistance. Current decreases by factors of ten, from 0.1 mA on the 19.999 K range, to 1 pA on the 1999.9 G range. On conductance (when both knobs set to the blue “pS” as in the photo), one volt is applied across the unknown resistance.

The restive sample (unknown resistance) is connected at two points; the “Non-Sensitive Terminal” is the source of current (or of 1 volt in the pS range), and the “Shielded Sensitive Terminal” is connected to a high-impedance amplifier, which uses feedback to hold the sensitive terminal at ground potential. In the photo, a piece of sandpaper (1867.3 G ohms) is connected to two short flexible clips, which is the most common method of connection. For measurements farther from the meter, 50 cm cables (with alligator clips at the ends) are also included. The “Sensitive Terminal” cable is a BNC coaxial type. The other terminal cable is a standard banana type. The “Case Ground” banana terminal on the left allows for the connection of a conductive enclosure to reduce outside interference, if needed. When measuring high resistance, the sensitive terminal should be shielded from any people or objects moving nearby because moving charges will cause interference. Any open-top metal box or a simple aluminum foil enclosure connected to case ground can do the shielding. A conductive box that plugs into case ground (shown) is an available option.

The meter is battery-powered with a standard 9 V replaceable battery (included), which operates about 40 hours before the low battery indicator comes (on indicating about one more hour of battery life).

Measures conductance in one range: 199.99 pico siemens. Accuracy is +/-2% of reading +/- 1 count. During conductance measurements, 1 volt is applied across the component.

Battery is a standard rectangular 9 Volt type, with “LOW BATTERY” appearing on the display when approximately one hour of battery life remains. Battery life is about 50 hours using an alkaline, and 25 hours using a regular battery. A battery is included. 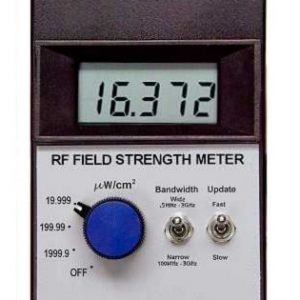 Technically a “power density” meter, the RF Field Strength Meter detects the electric field of radio and microwaves (RF) from .5 MHz to 3 GHz, and expresses the field strength as power density (.001 to 2000 microwatts/cm2). This is an … Read More 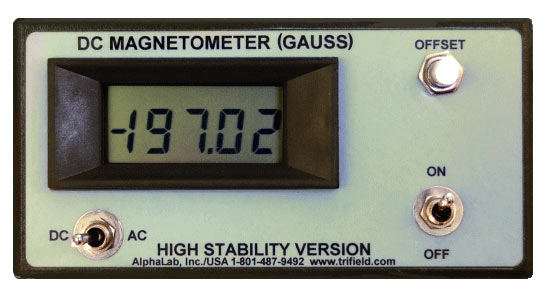 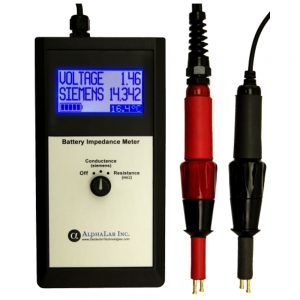 The Battery Impedance Meter is designed to read both the conductance (range 10-19,999 siemens) and resistance (0.050 – 19.999 milliohms) of large batteries from 1.2 to 60 volts. (These measurements determine whether the battery needs replacement.)

This meter measures AC electric field in the vertical direction (same direction as the long axis of the meter). It has a wide frequency range (40 Hz – 20 KHz) and high accuracy (+/-2% of reading +/- 1 count) with … Read More 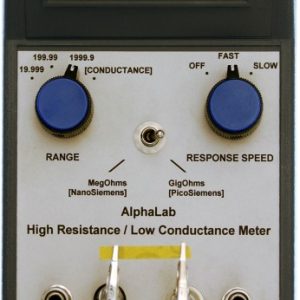 There is always a problem with ultra high resistance measurements: only a very small amount of current is flowing through the component that is being tested. Therefore certain precautions must be taken to prevent interference from external sources. A grounded … Read More